Gin from the Western Isles

A friend of ours who lives in Edinburgh came to stay and brought us a bottle of Isle of Harris gin, made on the Outer Hebridean island of that name. She knew and liked the gin already, but was also taken by the quaintness of the process of acquiring it—you can only buy it from the distillery, either by mail or you can place your order then collect it at an appointed time and place, furnished with a wonderfully old-fashioned docket (see photo). I don’t know if this is to do with the logistics of getting the gin to the mainland or whether it is part of a deftly constructed image, designed to evoke a sense of scarcity and old-world craftsmanship.

The website’s homepage is mostly about their vision of themselves as “the social distillery”. This manifests itself in being constantly open to visitors—though in fairness most shrewd distilleries offer tours, tastings, a café/restaurant, etc, these days—but also as a shot in the arm for an island suffering “acute economic problems” as a result of a dwindling population, by creating a business that uses local resources to produce jobs and income, as well as acting as a global advertisement for the island’s charms. It’s interesting that the distilling team all come from other backgrounds—a builder, a joiner, a crofter and ex-engineer, etc. All have re-trained from scratch to learn how to make spirits. 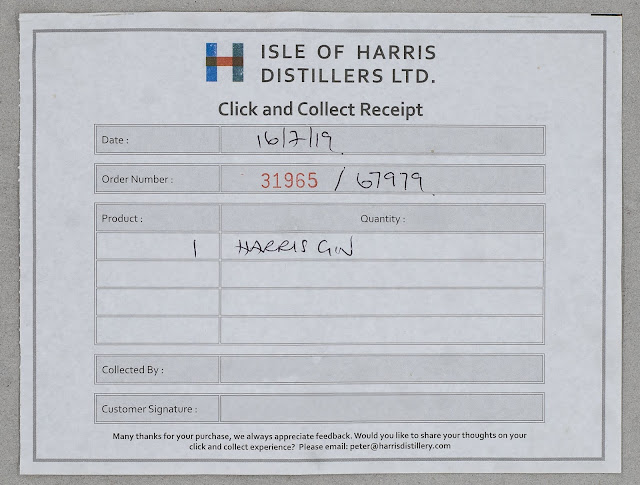 Harris is most famous for Harris Tweed, the choice of country gentlemen everywhere, and the only fabric in the world protected by an Act of Parliament that closely defines how, where and from what it can be made. This year the distillery had a project to create their own Harris Distillery Tweed pattern, and you can see how they are keen to borrow from the cloth’s sense of tradition and artisanal integrity and quality in how they present their own products. On the underside of the bottle is the Latin motto Esse quam videri—“To be, rather than to seem”.

Of course gin is not a traditional product of the island. (Oddly, neither is whisky, though the distillery is working on its own dram: in fact they think of themselves primarily as a whisky distillery. Like others, they clearly realised they needed the gin to bring in revenue during the long years it takes the whisky to mature.) So the distillers have instead sought a botanical bill that they feel captures “the elemental nature of our island, particularly the maritime influences of the seas which surround us”. The most striking botanical is sugar kelp, a local seaweed harvested by hand by a diver. What does sugar kelp taste of? Who knows—unless they have sampled the “sugar kelp aromatic water” that the distillery also sells, but the implication is that, as its name suggests, it is both briny and sweet. The other botanicals are all common enough: juniper, coriander seed, cassia bark, angelica root, bitter orange peel, cubeb, liquorice root and orris root. 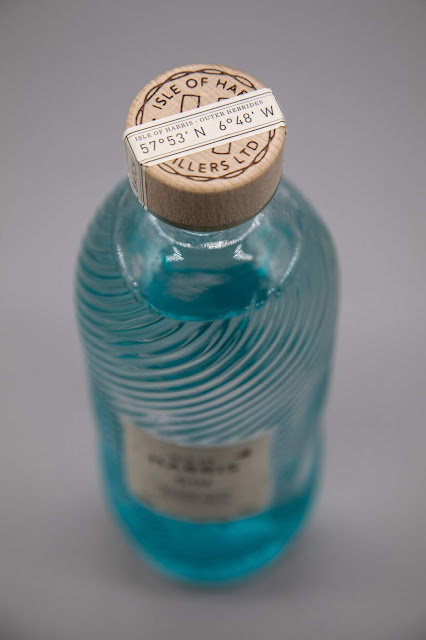 The most striking reference to the sea is actually the bottle that the gin comes in, with rippled glass to echo the waters of Luskentyre, a marine blue rising from the bottom and a label made of paper flecked with copper leaf and sugar kelp—no two are the same.

So what does it taste like? I was expecting a bold mouthful with an ozoney whiff of the sea, but in fact to me Harris gin is rather elusive. The nose has piney juniper and an agreeable character of fresh lemon peel and grapefruit, a floral element like violets or rose, and a hint of black pepper (possibly from the cubebs). Dig in and there is a subtle herbal layer too. The palate follows on from this with much the same balance, and perhaps a slight sugariness at the end (is this from the sugar kelp?). A direct comparison with Plymouth Gin, which I happen to have a bottle of, shows that both have a strong citrus element, but the Harris gin has the smoother, sweeter mouthfeel of a more refined spirit. (Liquorice can also give a suggestion of sweetness.)

Does it remind me of the sea? Not really, but this is a question that has come up before with my studies of Cornish gin—what exactly would make a gin redolent of the sea? I suppose if I concentrate hard I can persuade myself there is a slight brininess on the finish, but I don’t think it is something that would strike me if I weren’t actively looking for it. I notice that a number of the cocktails that various bartenders have created for the gin, listed on the website, use Fino or Manzanilla sherry, which does indeed have a sea-breeze quality to it, or some kind of seaweed, or indeed added sea salt, suggesting they felt the gin needed a bit of help if it was to smack of the waves. (One recipe actually has you add salted fish roe.)

The recommended serve is essentially neat. They advise you to try it as it is, then, if you must, add some ice, but large pieces to minimise the dilution. If you insist on adding tonic, use only a splash. For a garnish they recommend not a sprig of seaweed or something preserved in brine, but a slice of grapefruit. I tried this and it certainly sits comfortably with the strong citrus notes, but doesn’t have much to do with the sea.*

I think some gins probably are best consumed neat or just on the rocks, such as Roku or TOAD Physic Gin, because their subtle complexities are easily swamped. Harris gin is certainly subtle, but I’m not sure it is that complex. It’s upfront character is essentially sweetish citrus.

I find I’ve worked through almost the whole bottle of Harris gin in my quest to try and establish its character—so it is certainly drinkable, but hard to pin down. Finally, still riffing on the brine angle, I make a Dirty Martini, using carefully controlled amounts of Belsazar Dry vermouth and Stirrings Dirty Martini olive brine (yes, it’s dedicated, bottled brine, that has had olives in it but from which the olives have since been removed before bottling—something DBS gave me ages ago). It’s nice enough, though I’m not sure the salty, savoury, olive brine really goes that well with the essentially sweet, fruity nature of the gin. But I concede it does (slightly) bring out the stemmy, herbal notes, and it is certainly a more complex drink that the gin on its own.

* Except in as far as the classic Salty Dog cocktail features gin, grapefruit juice and a salt rim. 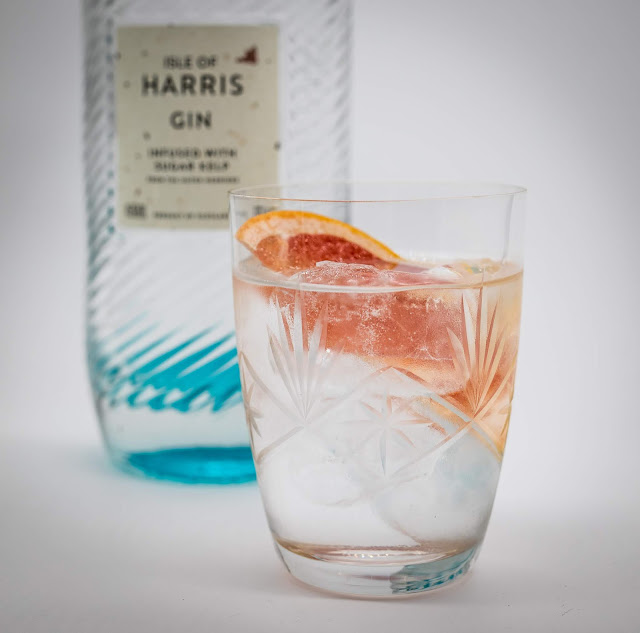 Posted by Clayton Hartley at 13:34