A cocktail is always more appealing if there is a story behind it, perhaps because as you slump over your glass you can feel that you are following in the footsteps of the great, partaking of an ancient and noble tradition.

The Earthquake cocktail was allegedly invented by Henri Toulouse-Lautrec and, as you might expect, involves absinthe—and thus immediately borrows from that drink's treasurehouse of romance and dangerous allure. The recipe I first encountered was:

Simply combine the two ingredients in a wine goblet. (Other recipes suggest a brandy balloon, though why you’d want to go out of your way to concentrate the eye-watering fumes from this drink, I do not know.) Given that the proportions are simply half and half, I particularly like the fact that this recipe specifies fully three parts of each, thus adding to the whole mood of doomed indulgence.

Needless to say, anything involving this much unwatered absinthe is hard to drink. Some sources do suggest adding water or ice. Note that absintheonline.com recommends using a lower-alcohol absinthe such as Swiss La Bleue or Pernod White Fairy, and I imagine that Clandestine (53% ABV and more readily available in the UK) would fit the bill.

However, any research quickly throws up an alternative recipe, espcially from more general cocktail sources (as opposed to those specifically focusing on absinthe chic).

1 part gin
1 part whiskey
¾ or 1 part absinthe
Shake the ingredients with ice and strain into a Collins glass.

Some recipes specify Bourbon whiskey; whether the others mean to imply it, or whether they mean Scotch, is not clear. I have tried it with both and it is quite pleasant either way, though the woody sweetness of the Bourbon offsets the bitterness of the absinthe more.

I initially assumed that this version was a later invention to appeal more to international tastes. But in fact The Savoy Cocktail Book (first published in 1930) gives this recipe. So perhaps the absinthe/brandy version is a spurious later invention, based on the sort of thing fans would assume that Toulouse-Lautrec would drink. 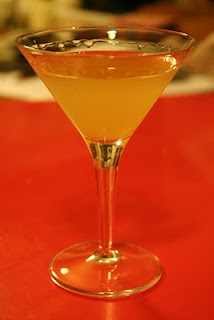 Which brings us to the name. There are various explanations around: one is that it’s called an Earthquake because this is the effect it has on you. The Savoy Cocktail Book, which is normally pretty terse in its recipes, does add, “This is a cocktail whose potency is not to be taken too lightly or, for that matter, too frequently!” It also gives a different explanation for the name—that if there should happen to be an earthquake while you are drinking it, it won’t matter. (A slight variation on this version is that if there is an earthquake while you’re drinking it, you won’t even notice.)

So who knows if Toulouse-Lautrec ever had anything to do with this cocktail? For completeness’ sake I leave you with one more recipe I have found:

Serve in a martini glass,“ice and sugar lump optional”. I’ve not tried it but it sounds like what an absinthist drinks on holiday, a hardcore sangria. Or just something you'd create by accident while clearing up after a party.
Posted by Clayton Hartley at 13:05