Not only here for the beer: spirits from Adnams 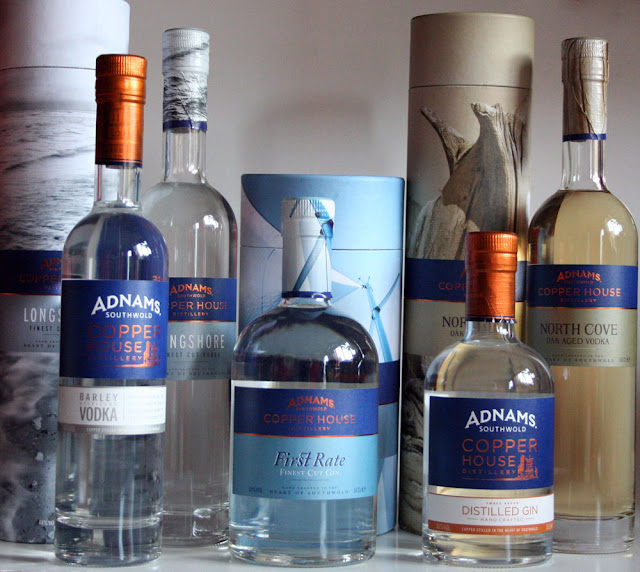 Anyone with a still seems to be chucking out a gin at the moment, but I was surprised to hear recently that Adnams, brewers of fine Suffolk ales since 1872, had also now produced a range of vodkas and gins. I shouldn’t have been, really—their premium spirits are made from exactly the same grains as their beer, a mixture of locally sourced barley, wheat and oats. Even though they’ve had to have a still installed—a copper one, for they too subscribe to the cult of copper—it’s all part of the process. So are they bandwagon-jumping or do they have something to bring to the party?

Let’s start with Adnams Copper House Barley Vodka (40% ABV). It’s made from East Anglian malted barley, brewed into a wash at 6% ABV without hops, then distilled. They describe it as “beautifully smooth…with a natural sweetness”, but to me it has a keen nose with a hint of dry sherry. The palate does have cream, by comparison with mass-produced vodkas, but compared to other premium vodkas I’ve had recently it tends more towards fruit and minerals—this is a characterful drink. Indeed Adnams describe it as having “plenty of character from our handmade copper pot still”. I couldn’t say if that is where the flavours come from but if I line it up with some others I have to hand—SW4*, Sipsmith, Chase and Indiana—it seems to have oranges, grapes and even cherries going on. Sipsmith and SW4 are also made from barley but their styles are quite different. If you’re after a vodka that is all about creamy smoothness and nectar sweetness, then this probably isn’t the one for you, but my curiosity has been well and truly piqued.

Next up is Longshore, a vodka bottled at 48% ABV, made from the more complicated three-grain blend and a finer “cut”—taking just the choice middle section of the distillation batch. And what a difference it is. If the Copper House barley vodka has an edgy, fruity character, this vodka smells like a meringue, rich and sweet. But on the palate it still has a family resemblance to the first one—rather than the unctuous smoothness of Sipsmith it has a distinctly citrus-cream fruity flavour with hints of wood. It tastes like a wooden crate that was used to store oranges. 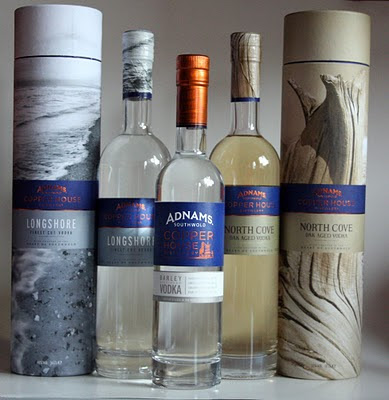 As a relative vodka novice I’ve been astonished by the variety of flavours you can get from this basic recipe. The Chase potato vodka, for instance is vinous on the nose with a smooth palate and a hint of pears. So what will we make of the third Adnams offering—North Cove Oak-Aged Vodka, a version of their Longshore that is bottled at 50% ABV after sitting in oak barrels? (The sample that I have spent a month in a mix of French and American oak though I’m told the production version will use just European barrels.) As soon as you stick your nose in the glass you really can smell the wood, and not just a general “woodiness” but actual sawn planks. Then comes the buttery, vanilla richness, familiar from oak-aged wine. Adnams suggest coconut too, and it is there, in a coconut-matting kind of way. On the palate again a strong wood character—probably too much for some—giving it an edge almost like red wine. You can imagine this vodka pairing well with food, such as smoked salmon; this, or perhaps the lighter vodkas, might be a good match with sushi.

To me this whole range has a striking fruit character. The oak-aged one has elements of prunes and marmalade, but even the basic barley vodka has it too. The next morning I smell all the empty tasting glasses and, while Indiana, SW4, Sipsmith and Chase have no residual aroma to speak of, all of the Adnams range do, especially the oak-aged, though less so the Longshore. When we tried them all together I got the impression that DBS was most keen on SW4, followed by Indiana and Sipsmith. I think they’re excellent too, but I have to say I’m taken by the forthright character of the Adnams range.

The family also includes two gins, the Distilled Gin made from the barley vodka and First Rate gin made from the Longshore vodka. The Distilled Gin has six botanicals, featuring sweet orange peel and hibiscus flower, plus juniper, cardamom, coriander seed and orris. This sweet, floral approach is very much of the moment. Berry Bros. No.3 gin is specifically intended for Martinis and also includes sweet orange peel in its spartan botanical list: I assume the sweetness is there to make it more palatable served more or less neat.

Certainly there is juniper and citrus straightaway and a pronounced floral aroma. I don’t really know what hibiscus tastes/smells of but here there is a sweetness and a hint of blackcurrants too. This perfumed character reminds me slightly of soap, though I guess that is more a comment on how we choose to fragrance our toiletries than on the gin. On the palate overall it’s again about sweet orange, flowers and also gingerbread. Plus a smidgen of geranium. Diluted by half with water, it maintains this character, though I get a whiff of strawberries too. 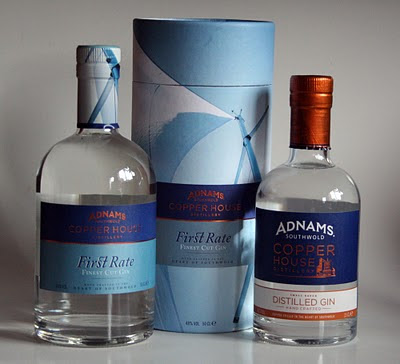 First Rate gin immediately contrasts by having more juniper on the nose. It has the same botanicals, minus the hibiscus, and adds caraway and fennel seeds, cassia, angelica, lemon peel, liquorice, thyme and vanilla. You do get a clear family resemblance: flowers, gingernut (interesting that there are no flowers in this one, and no ginger in either) and that stemmy geranium note. On the palate this persists, though it also has more alcohol, plus the smooth, creamy character of the underlying vodka. Watered by half, I also get a dry aromatic perfume like lavender, which must come from the thyme and perhaps the seeds.

Comparing these two with SW4 gin, you realise how much more the latter is characterised by mid-range spice notes of coriander, cinnamon, cassia and maybe nutmeg, compared to the floral characters on display here. Oddly I am reminded of the G’Vine range, which is also all about flowers (vine flowers in their case), sweetness and with a strong ginger note. They too have a lower ABV version and a higher ABV one with a sterner, more junipery mix: I assume the basic idea here is to have a sweet, floral, approachable version marketed at people who basically are put off by traditional gin’s austerity, plus a more juniper-driven one for people who do actually like gin.

Both the Adnams gins are comfortable with tonic at 2:1. Again the Distilled is sweet and floral while the First Rate brings in a steely note of juniper and the sharp aromatics of the spices and resinous thyme. Adnams themselves feel both gins work well with tonic or as Martinis, and benefit from lime garnishes, adding that First Rate is also “stunning with a strip of cucumber”.

Personally I prefer the First Rate, because I like a drier, more pokey spirit, but I think both are well made, intriguingly complex products. They’re not cheap, mind—and with both First Rate and Longshore the more pernickety distillation method cranks up the price further. Adnams Copper House Barley Vodka is £22.99 for 70cl; the Longshore Vodka is £23.99 for 50cl; the North Cove Oak Aged Vodka is £25.99 for 50cl; the Distilled Gin is £23.99 for 70cl and the First Rate Gin is £24.99 for 50cl. All may be purchased directly from Adnams’ website.

* This vodka doesn't really have a name yet. On the Park Place Drinks site it is called Radost but it hasn't actually been brought to market yet. Perhaps you can email Martin your suggestions for a name?

Posted by Clayton Hartley at 02:41