Bringing it all back home II: Indiana Infusions 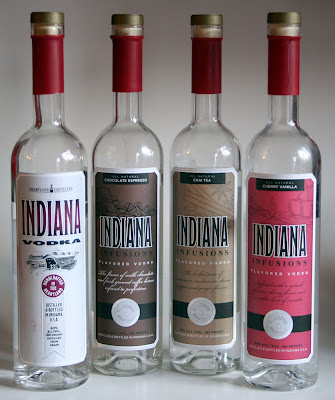 Flavoured vodka is everywhere, to the extent that some of the more exotic gins out there could be more usefully described as flavoured vodkas (which, in a sense, of course they are), and are probably aimed at the same market.

As I mentioned in the last post, Indiana vodka produces a range of seven “infusions”. I haven’t tasted them all, but I managed to get my hands on their Chocolate Espresso, Cherry Vanilla and Chai Tea versions. (They also make Double Vanilla, Raspberry Citrus, Honey Lemon and Orange Cream.) Apparently, early on in the experimentation process they decided that adding a complementary flavour to the main one worked jolly well, and they do that with all apart from Double Vanilla.

Of course there is nothing wrong with adding flavours to a vodka or any other spirit—that’s essentially what making a cocktail is—but there is something rather suspect, rather tacky or cheesy about the idea. For reasons that are hard to explain I find myself in possession of a bottle of Absolut Raspberri: you just have to smell it to realise it has never been anywhere near a raspberry (or even a “raspberri”). The cough syrup smell is deeply synthetic.

I don’t know how Indiana’s Infusions are made—the labelling only refers to “flavors” rather than actual ingredients, which doesn’t bode well—but they, on the other hand, give more of an impression that they might have involved real food. In truth they feel like something middle class people have a splash of in their cappuccinos—whereas the Absolut one is like something given a candy flavour to make it more palatable to underage drinkers in the park.

Cherry Vanilla The aroma is most strongly of marzipan. This suggests that real cherries were involved, because cherry stones do have an almond essence, in the same way that sloe stones give sloe gin an almond flavour. Tasting it, I’m rather surprised to find that it is sweetened, like a low-intensity liqueur. (Oddly the Absolut Raspberri, for all its candy flavouring, is unsweetened.) There are cherry elements in there too, but almond dominates. It’s like a liquid Bakewell tart. And also a good way to mask any cyanide you might want to offer a guest.

Chocolate Espresso A rather subtle nose: the first element that hits me is actually vodka, before cacao and coffee come in. Again it is sweetened, with the overall effect of a rather restrained Kahlua or crème de cacao.

Chai Tea A complex nose to this one, with black pepper hitting me first, then cinnamon. Nutmeg comes through on the palate as well (though there doesn’t seem to be any nutmeg in it—perhaps it’s the cardomom). It’s rather tasty, with a subtle flavour that invites you in rather than shouting at you.

So restrained are these that I do wonder what they are for. I give them to Mrs H. to taste without saying what they are. She thinks the Chai is like Becherovka (which does have a pronounced cinnamon note), can’t really place the Cherry Vanilla but thinks the Chocolate Espresso reminds her of Kirsch, which is interesting.

The Infusions site has some cocktail recipes: it suggests mixing 1 shot of the Chai Tea with an unspecified amount of egg nog. I’ve got some Advocaat in the fridge so I try it with that—if you mix 2–3 parts Chai vodka with 1 part Advocaat it does work quite well. Despite the sugar in the Infusion it dries out the Advocaat relatively speaking. “Vodka custard,” was all Mrs H. had to say on the subject. I myself don’t have a sweet tooth so I find myself wanting to mix the Chai Tea Infusion with something dry like unsweetened apple juice, where its mincemeat flavours should marry well. The Infusions site does suggest Chai vodka with Apple Schnapps.

I attempt to make a subtle Chocolate Martini using the Chocolate Espresso Infusion. At 3 parts SW4 gin to 1 part Infusion it’s still pretty subtle. At 3:1½ it comes through, though it’s now a bit sweet for me. I suspect I might get more joy from Mozart Dry, which is more chocolately yet bone dry.

One other cocktail they suggest for which I have the ingredients is the Tipsy Shirley, a distinctly unmasculine combination of 1½ parts Cherry Vanilla Infusion, 4 parts ginger ale and a splash of grenadine. It’s not bad but for me still a bit cloying. I try it without the grenadine and it is greatly improved—the cherry/almond flavour of the vodka works rather interestingly with the ginger. The drink just looks like pale ginger ale, so perhaps the grenadine was just there to make it the colour you expect from the taste. But I notice that, with a lot of the cocktails they recommend, the flavour of the infusion is reinforced by some other ingredient—all the Chocolate Espresso Infusion recipes have added chocolate or coffee liqueur; the Sara Soda has Orange Cream Infusion and orange soda; the Lemon Drop Martini has Honey Lemon Infusion with lemon juice and sugar, etc. It seems to defeat the object a bit, and suggests a lack of confidence in the infusions themselves.

Personally I think that the subtlety of these infusions, and the interesting flavour pairings in each one gives them good scope for grown-up mixology ideas, though I do wish they hadn’t added the sugar…

Posted by Clayton Hartley at 13:43