A new gold standard for mincemeat


Took delivery of Mr Bridgman-Smith’s homemade mincemeat vodka for the Candlelight Club the other day. I don’t know what the bottles originally contained but he’s made his own labels—and I see he has awarded himself an IAE Gold Medal. Well, what’s the point in running an institute if you can’t shower yourself with awards, prizes and commendations?

Having finished the vodka he took the boozy mincemeat left over and added it to cider—presumably on the same principle that spent sloes from sloe gin are sometimes used to make “slider”. I’ve had some and it’s jolly tasty: it would probably suit mulling.

The mincemeat vodka has been made an as ingredient in one of the cocktails for this Saturday’s Candlelight Club Christmas special. Here are the recipes that Will Sprunt has come up with: 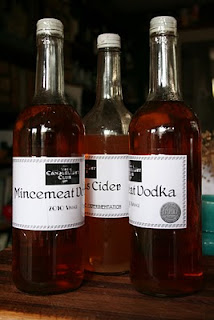 If you’re interested in coming along on Saturday, check out the details and ticketing info at www.thecandlelightclub.com.

Posted by Clayton Hartley at 04:26