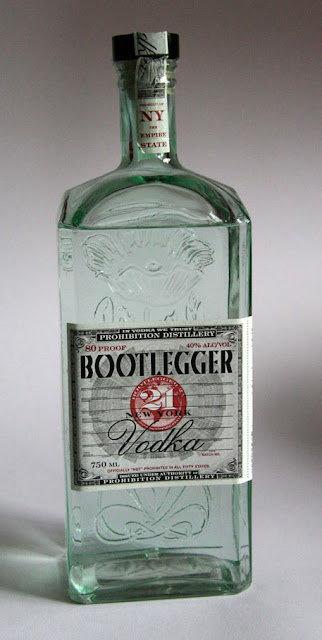 You can see why this appealed to us when Nick, my partner in crime in the speakeasy-styled Candlelight Club, got talking to one of the people behind it on a recent trip to the US. Confusingly, the Prohibition Distillery behind it has nothing to do with either Prohibition Gin, a fascinating “New Western” style made by Heartland Distillers, nor with Prohibition Ale, made by San Francisco’s Speakeasy Ales & Lagers, but they seem to have snaffled the name for themselves, and their packaging and website are all about the Prohibition era. (See a CNBC video of the chaps here.)

It’s a story of a pair of coves who, despite the recession, decided to quit their jobs in software sales and HR and start the distillery of their dreams in New York, evoking both the wily determination of the bootleggers and the post-Depression can-do spirit of their forebears. Up till now their product has been distilled for them by the Tuthilltown Distillery but they are soon to move into a 1929 firehouse in Roscoe, NY, where they will be doing their own distilling. Their first efforts won them a silver medal at the San Francisco World Spirits Competition, so they spent another nine months tweaking it, producing something that won gold at the 2010 New York International Spirits Competition and an “Exceptional” rating from the Beverage Tasting Institute.

Their vodka, named Bootlegger 21 after the 21st Amendment in 1933 repealing Prohibition, comes in a splendid “case”-style rectangular bottle with Art Nouveau designs moulded into it, suggesting a period apothecary. (I gather that the first person to sell whiskey in bottles in the US was George Garvin Brown, founder of Brown-Forman, who had a background in pharmaceutical sales and understood the reassurance that a sealed container gave to customers.) No metal or plastic screwcap here: it comes with a stopper, though I’ve discovered that if you serve the vodka from the freezer it can be a bugger to get the synthetic cork out of the bottle—I guess the glass contracts but the bung doesn’t yield that much…

The marvellous label evokes period officialdom—it’s based on one of those certificates that allowed you to get liquor for medicinal use (and the side label reads “Original Bootlegger 21 purchase ticket”), but it also has “In vodka we trust” blazoned across the top, suggesting banknotes. Interestingly, if you look at their homepage, the photo shows the label glued over the Art Nouveau design, but the bottle I’ve got (possibly the only one in the UK) wisely puts the label on the blank side of the glass, leaving the floral design unobscured on the back (see photo below).

Of course, for all the talk of heritage there is no suggestion of a vintage recipe—because no one drank vodka in the US in the Prohibition era. It might seem odd that they would choose so un-period a liquor to produce, but vodka is relatively cheap to make, requiring no ageing, so would be a good source of revenue for a start-up company.

“We initially had an idea to do a gin,” explains co-founder Brian Facquet, “which of course is period-appropriate. However, all other craft spirits companies announced they were doing gin and whiskey. We thought our base spirit was stellar, so we threw caution to the wind. Our shared space at Tuthilltown prevented us from entering into aged spirits, but at our new distillery in Roscoe we’ll begin whiskey and gin production in the future.”

Bootlegger is made from 100% corn, something that is relatively uncommon and mostly found, perhaps unsurprisingly, in the US and Canada. As such they trumpet the fact that it is gluten-free. (Do glutens pass through the distilling process? I have no idea.) At room temperature it hits me with a nose of sugar, some fruit, perhaps raspberries, and a paper/cellulose character. Compared to my current benchmark Green Mark, it is sharper, rougher, with a fruity spike and the cellulose thing again, like a damp cardboard box that has been used to store pencils. Compared to Russian Standard, with its vibrant spicy/savoury vegetable character, Bootlegger is defined by that dry sugar flavour. Contrary to what I previously said about frozen vodka, this is one that possibly does benefit from the low temperature. From the freezer it has a nice oily consistency and smells pleasantly like an iced cake.

Brian says that they chose corn for its soft mouthfeel and sweet, delicate finish. “We are six times distilled, then filtered through a massive amount of hardwood charcoal—we developed our own filtration systems that allow for extremely slow filtration over long periods of time. The result: we have a vodka that has no burn. Several critics called it a sipping vodka and last week Hooch Life called it ‘liquid silk’.” I’m not sure I’d say that, exactly, but it does have a sweet character.

There are a host of cocktails listed on the Prohibition Distillery website, so I try a few. Owny Madden’s Bootlegger 21 Martini is a basic dry Martini with orange and grapefruit bitters: the bitters dominate, at least at first, but the sweetness of the vodka does seem to balance with the bitterness and herbal quality of the vermouth. They suggest a few Gimlet varitions, interestingly using fresh lime juice rather than Rose’s Lime Cordial (sacrilege in some eyes); again the sweetness is apparent, along with a slight butteriness, but perhaps I’m now just thinking of corn on the cob!

Finally I try the Improved Prohibition Cocktail. I’ve not encountered any previous version of the Prohibition Cocktail, but I think it’s a cracking recipe. I’m not sure how much the vodka is contributing because I haven’t tried it with any other brand, but the combination of Cocchi Americano and apricot liqueur is an inspired one:

There are currently no plans to distribute Bootlegger 21 in the UK, though Brian says he would love to do so. If anyone is interested, get in touch!

Posted by Clayton Hartley at 06:11