A cocktail for St Patrick's Day

In case you hadn’t noticed, it is St Patrick’s Day. As saints’ days go this one is always greeted with an especially bibulous enthusiasm—and not just by the Irish, as if everyone feels the right to be adopted as temporarily Irish for this one night of partying, and that this somehow excuses the alcoholic excess that is to come…

Because 17th March falls on a Saturday we couldn’t resist having a Paddy’s Day special at the Candlelight Club. And given the theme, I couldn’t resist getting in some Poteen. Because of its high strength I didn’t really want people drinking it neat, so all the more reason to come up with a poteen-based cocktail.

Poteen (or poitín, pronounced pot-CHEEN and named after the small pot-shaped still) is a traditional Irish spirit, sometimes made from potatoes, sometimes from grain, sometimes from other things. It is unaged and colourless. In 1666 the British government made it illegal to distil poteen without a licence, leading to 300 years of cat-and-mouse between producers and the law. Clandestine stills, on remote farms or out in the wilds, would operate on windy days to disperse the telltale smoke of the peat fire. Popular at weddings, wakes and other parties, the spirit was also used as a muscle rub and a cure for sick calves.

Only in 1988 was a licence granted to export it, and only in 1997 did it become legal to sell in Ireland. Two brands of which I am aware make it commercially, Knockeen Hills and Bunratty. The latter produces at 40–45% ABV but Knockeen Hills takes the traditional high-strength approach and bottles at 60% (“Farmer’s strength”), 70% (“Gold”) and 90% (“Gold Extra Strength”). The first two are triple distilled while the 90% is quadruple distilled. It is the 60% version I resolved to use.

Knockeen Hills are vague about how it is made, but there is this on their website:

In the 15th and 16th Century, Crown Agents, and in later times the Garda, could impose heavy fines and confiscate farm machinery where sacks of grain or barley were found that they decided were intended to be used to produce a mash and subsequently poteen. Avoiding these telltale signs that poteen was being produced … meant producers could work more freely without worry.

Therefore, as no cow was ever known to have been confiscated, milk was frequently used in the spirit-making process, and our poteens follow that centuries-old tradition. We apologise for labelling errors on some bottles advising that grain sprit is used. 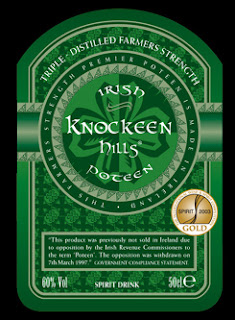 So there it is: Knockeen Hills is milk-based. This doesn’t mean it is entirely milk-based, but from this it is clear that no grain is involved. Using malolactic fermentation to make intoxicants is certainly not unknown—in Central Asia fermented mare’s or yak’s milk is a popular tipple.

The end result is intriguing stuff, like vodka, as you might expect, and yet not. The nose is at first acidic and fruity, perhaps like grappa, then comes a creaminess, like strawberry ice cream. Then toffee and maybe coconut, plus a strand of that medicinal note you often get in vodka. On the palate it strong in a whiskyish way (perhaps because it reminds me of cask strength whiskies), then that sweet fruit again, like fruit gums. But quite dry. Add a little water and something of shampoo wafts in but still mainly that sweet fruit. A hint of sourness comes out, perhaps the only hint of a milk base.

My first thought is to try something like a Martini, that won’t smother the distinctive flavour. But at 60%, in a party environment, the poteen really needs a little lengthening. Out of the usual mixers apple juice feels the most Irish and indeed it works nicely, working with the spirit’s fruitiness, and also adding some useful sweetness. I feel it needs a touch more of the latter, so I add a dash of Monin’s green apple syrup, for a little dayglo apple-iness, plus some elderflower liqueur, to bring out the floral high notes. Through all this the character of the base spirit still cuts through. The resulting cocktail is also appropriately green.

Shake or stir all ingredients together and strain into a cocktail glass.

If you mysteriously don’t have any poteen in the house but still want to toast St Patrick (and I guess a Snakebite would be out, arf, arf) how about a Black Velvet? Apparently invented at Brooks’s Club in 1861 to mourn the death of Prince Albert—as if a glass of Champagne is wearing a mourning band—this is basically just half stout and half Champagne, or sparkling wine. It sounds highly suspect, but in fact works quite well—the sharpness of the wine balances well with the toasty, creamy and slightly metallic stout, evening it out. Slainte!

Posted by Clayton Hartley at 04:18