You may have noticed that Mr Bridgman-Smith does not like Campari. He seldom misses an opportunity (nor invents one completely unwarranted) to remind us of this fact.

So I thought I'd take the opportunity to point out to you, if you didn't already know, what a great liquid Campari is.

I developed a taste for it while honey-mooning in Venice. A huge Campari sign loomed over the Lido (now gone, I hear) and the locals’ aperitif of choice was the “spritz”, a mixture of Campari*, white wine (sometimes sparkling) and fizzy water.The Austrians who ruled the place in the early 19th century started all this, to thin the strong local wine.

Campari, a bright red, bitter drink that's bottled at 25% ABV, was invented in Turin by Gaspare Campari in the early 1800s and his son was responsible for the advertising images (see example below) that helped promote it. The recipe is allegedly a closely guarded secret but is said to involve some 60 ingredients. In flavour it comes across as herbal and citric. Its colour traditionally comes from cochineal, a cactus-boring insect from South America, though I gather that in 2007 they replaced this with an artificial colouring.

The Negroni owes its existence to another cocktail, the Americano. By 1862 Gaspare had his own bar, Caffè Campari, in Milan, where he devised a blend of Campari, sweet red vermouth and soda water, calling it a Milano-Torino, after its origins. It later became known as an Americano because of its popularity with tourists. Legend has it that, in 1919, one Count Camillo Negroni went into the Caffè Casoni in Florence and asked the barman, Fosco Scarselli, to beef up his Americano with gin. (Whether at this stage the gin actually replaced the soda, I’m not clear.) This became Negroni’s favourite drink and it took his name. 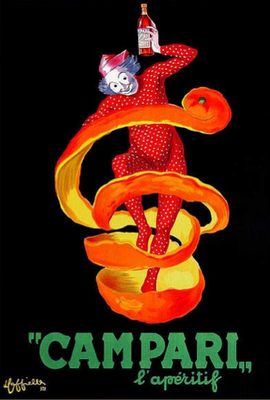 Stir the ingredients together over ice.This is conventionally served with a wedge of orange, sometimes joined by a wedge of lemon, or alternatively with a strip of orange or lemon zest. One elaborate variant has you squeeze orange zest over a lit match above the glass: the rind oils flare up and fill the place with a burnt orange aroma.

I’ve found variants where the vermouth is reduced to a ¾ part or the gin to a ⅓ part. Some people add Fée Orange Bitters. It is also sometimes served strained into a Martini glass rather than on the rocks, or you can tone it down with soda water. A popular drink in Italy is the Negroni Sbagliato (a “wrong Negroni”) where sparkling white wine is used instead of the gin (which sounds a lot like the Venetian spritz) or the Negroski, where the gin is replaced by vodka. A Cardinal is a Negroni with the red vermouth replaced by dry white vermouth—a pretty dry drink.

Replacing the gin with bourbon makes a Boulvardier. Using rye whisky gives you an Old Pal, a recipe that appeared in Harry MacElhone's famous ABC of Cocktails in 1922—just three years after the origin story of the Negroni.

Finally, one pleasant way I’ve discovered to enjoy Campari is to add a splash to one’s gin and tonic.

*Actually a Spritz can be made with Aperol, Select Pilla or Cynar, an artichoke-flavoured substance, but I gather that the Campari version is considered the “man’s spritz”. I tried Aperol once and thought it pretty foul, but I haven’t sampled the others.
Posted by Clayton Hartley at 07:29