Taking a shine to the fruit of Prohibition 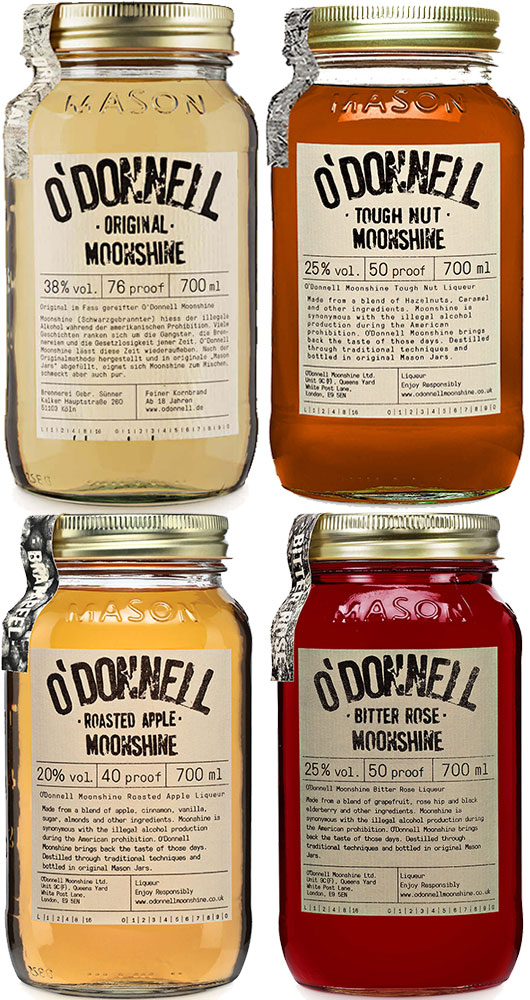 One of the defining characteristics of whisk(e)y, and what makes it expensive to produce, is the time it has to spend in the barrel to soften and acquire character. Scotch and Irish whiskey must legally be aged for at least three years. (In the US there is actually no minimum age requirement, though “straight whiskey” must have at least two years in oak.) Yet for all this there has been a trend for releasing unaged “white whiskey”, perhaps as a nostalgic throwback to Prohibition times when moonshiners would not have had the luxury of ageing.

I haven’t had a great deal of exposure to white whiskey, though one sniff of an open jar of Georgia Moon (a corn spirit guaranteed aged no more than 30 days—and in moonshine style it does indeed come in a jar rather than a bottle) sent me reeling from the raw fumes so that I never actually had the courage to taste the stuff.

So I suppose we shouldn’t be surprised when people try to come up with a novelty product that evokes the idea of white whiskey but without the eye-watering roughness. The first one I encountered was Bootlegger, actually made in the UK from wheat and distilled several times to make a smooth spirit, then flavoured with a “wood tincture” to give it a slight colour and vanilla/caramel woodiness, designed to mimic the slight barrel flavour from being stored and transported in wood.

More recently I was sent samples of O’Donnell Moonshine. It makes a clear reference to Prohibition, and takes its name from Spike O’Donnell, head of the South Side gang in Chicago, but in fact it’s another European creation, launched in Germany four years ago and now expanding into the UK with premises in Hackney.

According to director Hugo Cooke, O’Donnell is also essentially a wheat vodka, briefly aged in wood to impart a light colour and woody flavour—“the main difference being,” Cooke says, “that vodka has to be filtered and we don’t filter our sprit. The effect this has on the final product is that you should have a distinctive taste of wheat.”

O’Donnell Original has a pale straw-coloured tint and a nose essentially of vodka but with subtle, evolving elements of raw potato, apple, butter, vanilla, biscuits, varnish and a hint of hot dust. As you become acquainted with it I think it is the biscuit aspect (by which I mean something like a digestive biscuit) that comes to dominate.

On the palate it is a not particularly smooth spirit with a bit of raw wood (though not the powerful sawmill character I expected), some vanilla ice cream and a slightly bitter finish. Nothing much like whiskey, really.

What with the mason jar container and the Prohibition-related name, it’s clear that O’Donnell are trying to give the consumer a frisson of Prohibition daring and glamour—in fact on their website is a video in which an ordinary Joe goes into a bar, the barman pours him a shot of O’Donnell (somehow they have hammered a speed pourer into the screw cap of the mason jar), he knocks it back… and suddenly the room around him becomes a Jazz Age speakeasy filled with flappers and men in, erm, braces. The effect seems to wear off pretty quickly, leaving him back in the 21st-century—so he immediately makes lingering eye contact with the barman to hit him with another shot. A powerful metaphor for addiction of all kinds.

So I find it surprising that the brand’s main focus is not on this faux-moonshine original spirit but actually on the three flavoured versions of their product, described as “Roasted Apple (20% ABV) with apple, lemon juice, cinnamon, vanilla and almond, Bitter Rose (25% ABV) made with grapefruit, rosehip and elderberry and Tough Nut (25% ABV) made from hazelnut, caramel and a hint of whiskey.”* (They say that all the flavourings are entirely natural.) I guess since the product is presumably aimed at vodka drinkers, and flavoured vodka is a Big Thing, then it was a natural progression.

All the flavoured versions are coloured and even in the small sample jars I received (like the miniature jars of jam you get for breakfast in hotels) there was a noticeable sediment, suggesting that genuine organic matter did indeed go into them, rather than chemical flavourings. So what do they taste like?

Tough Nut
Smells just like a digestive biscuit—caramel and vanilla but definitely something buttery and floury too. This continues on to the palate, which it is almost painfully sweet for me, plus some spirit warmth. The biscuitiness is the same character in the original but more intense—in fact if you compare Tough Nut with Original the main difference is that it is sweeter and has an added dark caramel dimension.

Roasted Apple
The nose is sour and sweet, very confectionary. In the mouth it is not as sweet as Tough Nut, but that biscuit character from the Original once again pokes through. This tastes of sour apple in the way that a jelly bean might, though overall it is surprisingly lightly flavoured. This might limit its usefulness as a cocktail ingredient, though mixing doesn’t seem to be a thrust for the brand—they suggest drinking the Bitter Rose with tonic in the summer, and that is about it.

Bitter Rose
Smells like a cross between sloe gin, cough mixture, prunes, poached apricot and a fizzy sweet. (Anyone remember Spangles? Boiled sweets that somehow had a carbonated tingle in them.) And slightly dusty, like a fruit liqueur you brought back from holiday, which then sat on a shelf for the next seven years. It tastes a little like port, though perhaps specifically like port mixed with Coca Cola. It neither smells nor tastes like roses, though perhaps the name is just a reference to the colour. It does indeed pair well with tonic water—about half and half seems to work best—which brings the citric grapefruit character more to the fore. (In fact on one page of the website they specifically refer to it as a grapefruit liqueur.)

The basic O’Donnell Original is £24.90 for 70cl, so you could get a genuine American whiskey for less money from any supermarket. Clearly it really is aimed at a vodka-drinking market who fancy the idea of moonshine whiskey, because of its associations with the romance and style of the Prohibition era (and who am I to argue—it’s what I do for a living), but don’t actually like whiskey itself. And maybe really like biscuits. (Has anyone tried dunking a digestive in O'Donnell?) I confess I don’t get it, but then I like whiskey and have never met a flavoured vodka** to which I would give the time of day.

For me the most noteworthy aspect of this is Hugo’s mention of their spirit not being filtered. The Original really does have an unusual floury, digestive biscuit flavour (and allegedly it has no additives, just a little time in a barrel), literally like someone has left a few biscuits to soak in a jar of vodka, so this must indeed be the flavour of unfiltered wheat spirit. Which is interesting.

* In fact at time of writing the UK website shop was out of stock of the Original.

** Unless you count gin, of course, which is arguably a flavoured vodka. You know what I mean.

Posted by Clayton Hartley at 13:35