Marmite XO: the spread of kings? 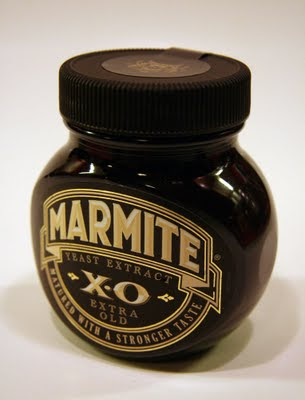 I was mooching through my local Sainsbury’s and I literally stopped dead when I spotted this. OK, it isn’t actually booze but it clearly uses booze terminology and, I would suggest, is clearly trying to borrow the glamour, cachet and exclusivity of premium aged spirits.

Marmite XO has been made, it says here, “Using four specially selected yeast sources. Our master blender has crafted the secret Marmite recipe and matured it for four times longer to create a Marmite so strong and full-bodied it can only be for the most devoted of lovers.”

I confess I wasn’t aware that Marmite was matured at all. Perhaps it isn’t really, but as the actual recipe is a secret, who knows? Marmite is made from concentrated brewer’s yeast and was invented by accident in the late 19th century by German scientist Justus von Lieig. The original factory was in Burton upon Trent, where they used by-product yeast from the Bass brewery. During the First World War it was issued to British soldiers because of its high vitamin B content.

So from a marketing point of view, with Marmite XO they are going down that familiar “you either love it or hate it” route, by making a version that is like Marmite regular (a simple Table Marmite, I suppose) but more so. And given that Marmite is made from a brewing by-product, it’s not so strange that they should use alcohol concepts to sell it. It’s not the first time they’ve produced a special verision: in 2007 there was a Guinness version using 30% Guinness yeast, in 2009 there was a Marston’s Pedigree version, and in 2008 they even made a Champagne version, using 0.3% added Champagne (the wine, as far as I can tell, rather than Champagne yeast). 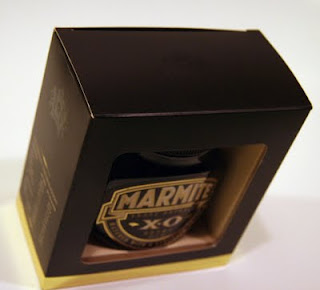 So, what does Marmite XO taste like? At first I was convinced that it did have a greater depth of flavour, but tasting it side-by-side I have to admit that I don’t think I can really tell the difference, nor does XO seem any stronger (but then it’s hard to tell, because it depends on how thickly you spread it).

Now, if you’ll excuse me I must go and continue working on my range of single-vineyard crisps and barrel-aged washing up liquid…

Posted by Clayton Hartley at 11:45