Update from the Lab #5 "Cask-Ageing Gin"

With the news that the Juniper Society's late-January session will feature the French Gin Citadelle, I got thinking about their two products—Citadelle Standard (1) and Citadelle Reserve. It is the latter that interests me most, as it is "refined" in oak casks. (2) This results in an altered taste and a liquid that is straw yellow. The flavour is quite mellow although there is some warmth after and there is some subtle flavour of vanilla, something which don't recall from the Standard Citadelle. (3) This is small batch gin and the bottle I was recently given (from 2008) suggested that only 21 "small" (4) casks of the gin will be released that year. The bottle is numbered. (5)

So that got me thinking about oak-aging (or refining) my own spirits. I know that there are folk experimenting with ageing cocktails. Mr Hartley and I had the pleasure of trying an aged Manhattan at 69 Colebrook Row—definitely worth trying.

Most folk who do this, though, use whole casks. The issue with this is the expense, (6) a space to store it in (with the right conditions) and the fact that even the "small" casks take several litres of alcohol to fill, quite an investment. 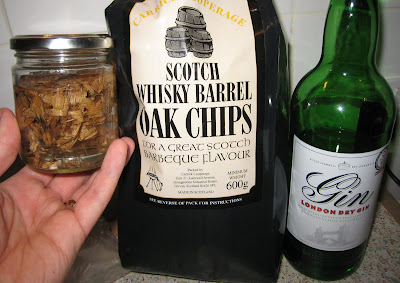 But how about using whisky barrel chippings? I managed to find some which were billed as "BBQ chips" (7) and I figured that these might well do the trick. In fact I did wonder whether they might even be better, or work faster, given that, when they are suspended in the liquid, they have a greater surface area for contact with the spirit. (8) 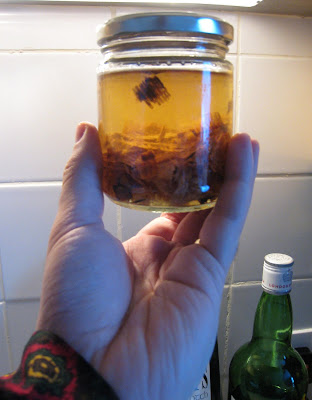 I filled a clean, empty jam jar with some chips and then added some gin. I used a good but inexpensive gin from Aldi. The picture here shows the results after just 12 hours in the jar. Sampling after 24 hours I found that some of the flavours were starting to change (easy to spot with a side-by-side analysis). After 36 hours the flavours are even more pronounced—very interesting. I've also got a vodka on the go for comparison and fancy trying even some Campari. (9) Cocktails would also be an interesting experiment—an "aged" Gimlet, or Old Fashioned, Martinez or Negroni (10), although I think I'll leave off the Alexanders and I fear a Gin & Tonic just wouldn't work. (11)
For those interested in coming along to the Juniper Society on January 31st there is a brief introduction to Gin starting at 19:00 and the show really kicks off at 19:30. For further details and to reserve your place (the event itself is free) call
Graphic Bar on: 020 7287 9241
I will keep you updated on the aged gin. (12)

Footnotes:
(1) Citadelle contains 19 botanicals, a huge number beaten only by The Botanist with 31.
(2) I imagine there is some technical reason why it can't be considered "aging".
(3) I wondered if anyone has ever used vanilla as a botanical—it appears that the answer is yes: Tru2
(4) You can get at least 45 bottles out of a cask so I wonder how "small" it actually is. I suppose it's all relative.
(5)  If you're interested mine was Cask 9 of 21 and Bottle No.45
(6)  Particularly when you consider shipping
(7)  For fancy chips the 'Trose (Waitrose for the uninitiated) sell Jack Daniels ones (£8)
(8)  "To increase the surface area" was a standard responses in my Biology exams and it's that phrase that got me my O Level.
(9)  This has just come to me and seems insane as I detest this bitter liquid of sadness.
(10)  Again with the Campari!
(11)  No reason not to try though!
(12)  Some readers may be wondering why their are so many footnotes in this post, well it a nod to Sir Richard Francis Burton, the explorer who's work is noted for (among other things) his frequent use of footnotes. On some occasions there is more text in the footnotes than books main body.
Posted by David Bridgman-Smith at 02:17